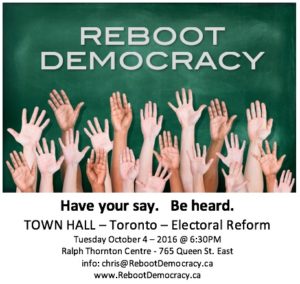 This town hall is an opportunity to hear more about electoral reform and if you wish, speak at an open mic. Your comments and opinions will be recorded and included in a report submitted to the parliamentary committee on Electoral Reform.

Hosted by the Toronto-Danforth Green Party.

Joyce Hall has been a member of Fair Vote Canada for 10 years, since hearing the organization’s founder, Larry Gordon on CBC radio explaining proportional representation. She immediately decided that Canada had to have PR, googled the Fair Vote Canada site, and joined. She has been teaching English on a contract basis for 20 years at three campuses of Seneca College. Before that, during late 80s and 90’s, Joyce was an activist for tenants’ rights.

Like many advocates of proportional representation she hopes that the current government initiative will give Canada a fair voting system where every vote counts equally, no matter where you vote or who you vote for.

Donate to the PEI Action Team